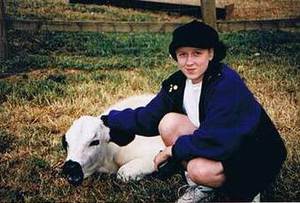 Tracy Sollis attended Prince Henry's High School, Evesham, when at the age of 15yrs she was diagnosed with acute myeloid leukaemia. Tracy had led a healthy active life, enjoying horse riding, table tennis, playing tenor horn in the local brass band and representing her school in the hockey team as a much valued defender.

Tracy wanted to be a veterinary nurse. This picture of Tracy with a young calf, was taken at the Cotswold Farm Park, the weekend before going into Birmingham Children's Hospital to prepare for a bone-marrow transplant.

Tracy had been feeling unwell for sometime, before the diagnosis of  was made. The year was 1993 and Tracy's only way of overcoming the disease was to have a bone marrow transplant. The odds of finding a suitable donor for Tracy were put at 50,000 to one so you can imagine the excitement when a donor at last was found. Tracy underwent her transplant in August 1994 and it was then a waiting game to see if the transplant had succeeded. It however became apparent that it had been rejected and after a brave fight, Tracy lost her brave battle on 21st February 1995

Tracy had been a happy and very caring individual who had expressed extreme gratitude to the anonymous donor who had provided her with a chance of life. On hearing that her transplant had failed she immediately felt she had let her donor down.

Tracy's ability to always put others first made a huge impact on all she came into contact with. She was concerned about the other children on the leukaemia ward at Birmingham Children's Hospital where she was treated. She was remembered to say, "We've got to stop this happening" and when asked how did she feel knowing she had the disease, responded with, "It's helping me to help others" - Tracy 1995

When I lost Tracy at the age of 15 years to leukaemia, I lost not only my daughter but also my best friend. Tracy's determination to fight the disease - despite a failed bone marrow transplant - was an overwhelming inspiration. It therefore became extremely important to fulfil Tracy's wish for something positive to be achieved for others and this resulted in the launch of The Tracy Sollis Laboratory Appeal to raise £100,000 to fund a research laboratory.

Some thought the task too great, but loyal supporters and I never doubted it - we had to do it - and we did! Thanks to magnificent help and support, the target was reached with the laboratory officially opened and dedicated to Tracy by HRH The Duchess of Kent on the 14th May 1996. The laboratory is in the grounds of The Royal Free Hospital, London and is a fitting tribute to all that had helped make this dream become a reality.

Far from flagging as this goal was approached, the support increased with offers of help coming from far afield - how could I possibly turn my back on the gateway to further ambitions that could still be achieved in this united battle against the disease.

The result was the official registration of "The Tracy Sollis Leukaemia Trust" as an independent charity with the aim and objective of promoting and assisting in the prevention and relief of sickness, suffering and distress of those afflicted with leukaemia, particularly but not exclusively by the provision of funded research.

Gordon Giltrap first became involved in Tracy's battle to overcome leukaemia, way back in 1993. Knowing that Tracy needed to find a bone marrow donor, Gordon kindly agreed to take part in a charity concert. The concert took place at Evesham's Working Men's Club, Worcestershire and was to be the first time the two were to meet.

Gordon's help didn't stop there. He called in several times to the Birmingham Children's Hospital complete with his guitar. As Tracy was interested in music, Gordon showed her his various playing techniques and on one particular visit ran through a new number that he had just written, but not at that time released. The number was called 'On Camber Sands'.  It was a great surprise to Tracy when she received a special taped recording of it from Gordon. I can remember Tracy listening to it while travelling in the car. It was in the middle of the night and Tracy was returning to hospital with an infection. The music lightened that journey and brought a smile to Tracy's face. 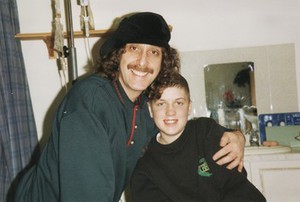 When Tracy's donor was found, it was great news for all. It was a chance of survival and hopefully a return to normal life - something which Tracy longed for. We all prayed and waited following the transplant procedure which went head in August 1994.

However, due to complications, it wasn't to be. The transplant failed and the leukaemia returned even more aggressively than before. It was a difficult time, but despite this Gordon kept in touch.

One evening there was a phone call. It was from Gordon. Would Tracy like to meet his good friend Brian May? - "What Brian May from Queen"!

Tracy had a meal in an Italian Restaurant with Brian, who asked if she would like to attend a 'Meatloaf' concert that very evening. Brian was to be the surprise guest on stage.  It was such a happy day. Despite Tracy being extremely unwell, the pleasure it gave will never be forgotten and it was all thanks to Gordon.

When Tracy passed away on February 1995 a £100,000 appeal was launched for a research laboratory to be situated on the grounds of the Royal Free London. Gordon played a big part in helping launch this appeal.

The Tracy Sollis Leukaemia Trust progressed to register as an independent charity and a Patron was sought. But who was to be the ideal person to ask? Why who else but 'Gordon Giltrap'.

We are delighted that Gordon is playing such a big role in representing the Trust.

Tracy, like so many other young children and adults, lost a long and brave battle and I am but only one of many parents and families whose lives have been torn apart by the consequences.

Looking back into the 1960's leukaemia was virtually untreatable, but thanks to progress, many lives can now be saved. There are however, some strains of the disease, which are very difficult to overcome. We can make a difference by working together to provide the urgently needed funds to back our promising young scientists - after all; the lifesaving answer lies in their hands! 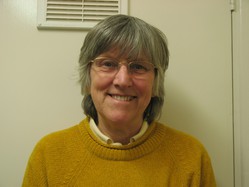 These days we hold many fundraising events including at least one annual concert by Gordon and with the help of many volunteers we run a busy Charity shop in Evesham .

Your help is vital and very much appreciated.