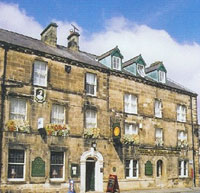 Rothbury Roots began in September 2001 when Bill Brown & Terry Wilson, the licensees of Rothbury's Queens Head Hotel, invited a group of local musicians and enthusiasts (including local resident ex-Lindisfarne guitarist Rod Clements) to set up a series of live music nights. Since then Rothbury Roots has gone on to establish itself as one of Northumberland's most popular live music venues, presenting folk, blues, country, jazz and contemporary singer-songwriters in a friendly, intimate setting.