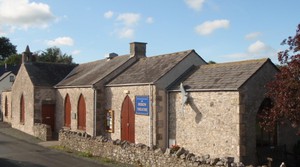 The Heron Theatre is a small, 80 seat, theatre housed in a listed building, which was originally one of the old two-room Grammar Schools of the 18th century. The village of Beetham is just off the A6, between Carnforth and Milnthorpe, on the southern fringes of the Lake District.

The theatre traces its origins to 1948, when a local headmaster formed an ambitious amateur dramatic group in South Westmorland. It flourished through the years, mainly through the performance of plays, together with film shows and literary events. From 1966 the Society developed its former rehearsal and storage space and in 1985 it was able to purchase the freehold of the old grammar school in Beetham. With the help of a substantial grant from the Lottery, it improved its facilities and developed the listed building into a compact and attractive studio theatre.

A particular feature alongside the entrance is The Heron Sculpture

Doors Open 45 minutes before the performance