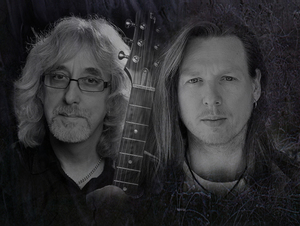 PLEASE NOTE: THIS IS THE ONLY GIG PLANNED WITH THE FULL BAND

The Summers End Festival, which takes place on October 4-6th at Lydney Town Hall, are thrilled to announce a very special event on the Saturday Evening of the Festival.

"Ravens and Lullabies" will be a unique electric performance by Gordon Giltrap (electric and acoustic guitars) and Oliver Wakeman (keyboards). Joining them in this exclusive one-off event will be two old friends of the festival, Paul Manzi (Arena, Oliver Wakeman Band - vocals) and Johanne James (Threshold - drums) plus a bassist to be named.

Gordon will be best known to Prog fans for his trio rock albums in the late 70s, and for his hit single "Heartsong" while Oliver's eclectic career has involved several solo albums, two albums with Clive Nolan, appearances with The Strawbs and Bob Catley and an eventful three and a half years in YES.

Although the two of them have been touring extensively as a duo, this will be Gordon's first full electric performance for over 30 years, while Oliver will be playing his first major concert with a full band since his departure from YES in 2011. The set will revolve around a performance of their superb album "Ravens and Lullabies" released earlier this year on Esoteric Antenna, which mixes intimate acoustic performances with full-blown Prog, but will also contain some pieces from both men's back catalogue.

"This is a huge coup for the festival and it's thrilling that we have been able to persuade Gordon and Oliver to bring the "Ravens and Lullabies" band together and play this amazing and unique concert just for us. Little did I know when I saw the Gordon Giltrap band in 1979, or indeed Oliver with Yes in 2009 that I'd end up welcoming them onto the Summers End Stage in 2013."

The current line up: