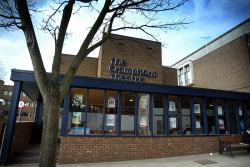 
The Cramphorn Theatre (adjoining the Civic) is an intimate studio theatre seating up to 177 and presents a programme of smaller scale professional touring theatre, music productions, dance and lunchtime concerts, as well as being renowned for its innovative mixture of art house, world and mainstream film screenings.

By Car:
The theatres can only be accessed via Parkway (ring road).  Look for the turning into Rainsford Road, by the Methodist Church and County Hotel. Look for the brown signs around Chelmsford directing you to the theatres.