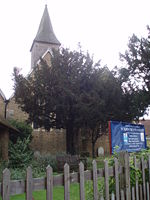 
Set in a beautiful church with wonderful acoustics, Farncombe Music Club plays host to a once monthly concert.

Since the concerts started in June 2007 the venue has played host to many fantastic concerts by acts as diverse as After The Fire, Christine Collister, Kiki Dee, Charlie Dore, Julie Felix, Gordon Giltrap, Steve Knightley, Hazel O’Connor, Tom Russell, Eve Selis and Stackridge.

Situated in St. John’s Street right in the centre of the village just opposite the Co-op store, there is on-street parking for cars with plenty of spaces around Farncombe railway station which is just 2 minutes walk from the venue. For rail travellers, Farncombe is on the London Waterloo – Portsmouth mainline. Trains are regular and journey times are London – 40 minutes and Portsmouth – 1 hour.

The seating is unreserved.

Tickets are available in person from Record Corner in Pound Lane, Godalming – www.therecordcorner.co.uk – no booking fee for cash or cheques. Tickets are also available online from www.wegottickets.com/julianlewrymusic for which there is an additional 10% booking fee.