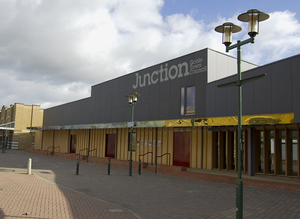 Junction has been made possible by funding and support from Yorkshire Forward, Goole Town Council, Arts Council England and East Riding of Yorkshire Council. Begun in 2008, the building was officially opened on 7th November 2009. The live events programme replaces that of the long running Gate theatre, and the opening of Junction has seen the first cinema screenings to take place in Goole for 30 years.