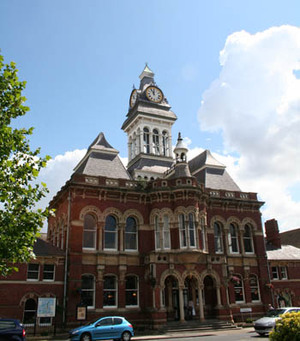 In 1972, a dome replaced the original wrought ironwork over the clock tower and in 1974, the magistrates moved to the London Road, now home to Belvoir Property Management.  In the same year, South Kesteven District Council was born and the Grantham Borough Council ceased to exist.

Apart from the Mayor’s Parlour, much of the  building was redundant until 1991 when it was redesigned by Sleaford architect Tim Benton and re-opened as the council owned Guildhall Arts Centre at a cost of £1.2 million.

This renovation work saw the session’s hall transformed into the 210-seat theatre and the ballroom was redecorated to its former glory, with the main entrance being at the side of the building. The jail area was converted into the box office.

In 2010 an exciting refurbishment, saw the box office move to the front of the building and the grand victorian entrance being used once more, a new coffee shop was housed in the jail where the kitchen area is still referred to as ‘the back cell.’ 
The box office is open 9.30am to 4.30pm Monday to Friday and 9.30am to 1.00pm on Saturdays and 45 mins before all evening shows. Out of hours please leave a message on our voicemail and we will get back to you as soon as we can!