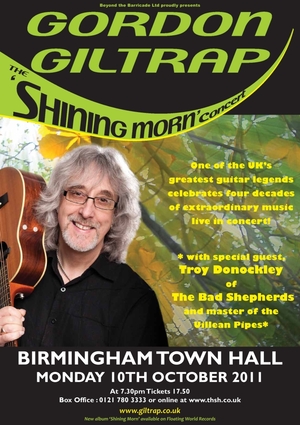 In honour of the recent 'Shining Morn' CD there is to be a very special one off concert in Birmingham's stunning Town Hall.

The evening will celebrate four decades of extraordinary live music from one of the UK’s greatest guitar legends. Gordon has been described in the press as ‘A truly outstanding musician who delivers a dazzling and enchanting performance.’ Evening News. ‘A modern day master of the acoustic guitar.’ Guitarist Magazine

Gordon will be joined for this exclusive event by a special guest, the master of the Uilleann Pipes, Troy Donockley of The Bad Shepherds.

This is going to be an event you won't want to miss, so book your tickets now Town Hall Birmingham is one of the oldest concert halls in the world. It has been at the centre of British musical life, and at the heart of Birmingham’s cultural scene, since the day it opened in October 1834.

The Town Hall re-opened on Thursday 4 October 2007, with a two-week festival of events on the theme Celebrating the Past, Pioneering the Future.

Acclaimed at its opening in 1834 as the finest music hall in the country, this Grade 1 listed landmark has been lovingly and painstakingly renovated by a dedicated team of conservation and construction professionals. Since that time, its imposing neo-classical design has dominated the City centre’s Victoria and Chamberlain Squares.


Tickets: £17.50
Plus £2 fee per transaction on all bookings except purchases made in person at the Box Office.