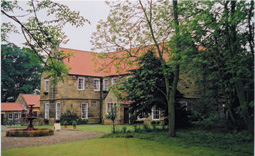 Pinchinthorpe Hall dates back to the 12th Century when the Norman family of Pinchun held land here.
At the beginning of the 14th Century the site passed to the de Thorpes. Walter de Thorpe was Prior of Gisborough Abbey 1393-1408. In the mid 15th Century the manor passed over to the Conyers family then in 1576 it passed to the Lee family and they owned the site for the next 400 years. Edward Lee was Archbishop of York in 1531 and Sir Richard Lee was Lord Mayor of London in 1461-1470.

The present building was built in the 17thC but beneath the gardens lay the remains of the very first Manor built during the time of King William.

The gardens date back to the Georgian era and they give a fascinating view of life as it was centuries ago. Parts of the original medieval moat still remain as does a well which would have provided the only supply of water. The kitchen garden provided fruit and vegetables to the manor and evidence of the original compost heaps behind the hollow brick walls of the hothouses is clear to see. The natural heat from the compost would permeate through the wall cavity providing that essential heat in order for the vines and tender plants to survive.

In the late 1800's Pinchinthorpe Hall became home to Liberal MP Penry Williams during which time Lloyd George was known to stay at the Hall on a number of occasions.

In 1996 Pinchinthorpe Hall was purchased by the Tinsley family. The former dairy and coach house was then converted into a micro organic brewery and brewhouse bistro and the Manor into a Country House Hotel and fine dining restaurant.

FROM THE SOUTH
Approaching northbound on A1 (M) leave at exit signposted A168 (A19) Teesside.
Continue on A19 until exit for A172 Stokesley Cleveland Tontine
Continue on A172 until roundabout at Stokesley
At roundabout take third exit signposted A173 Great Ayton
Follow A173 through Great Ayton and Newton Under Roseberry
Pinchinthorpe Hall is on right just after entering the hamlet of Pinchinthorpe.