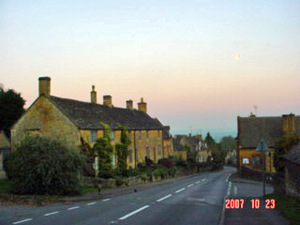 Swalcliffe, is a small, peaceful village in the north of Oxfordshire, England on the edge of the Cotswolds. It is one of several small villages (including Tadmarton and Broughton) on the B4035 road between Banbury and Shipston-on-Stour. Its name is said to mean 'the cliff where swallows nest' and has been spelled and pronounced differently over the centuries. It is still sometimes called 'Swayclye'.
The wooden village hall was built by voluntary work and public subscription in 1924.

The village has a church (St Peter and St Paul), a pub (The Stag's Head), several cottages and houses, and a large area of woodland and fields. There is also a boarding school, Swalcliffe Park School, for boys with special educational needs. Just to the north of the village lie the site of an Iron Age hill fort (best viewed from the Shutford side), Roman villa at Swalcliffe Lea (site only), and line of the old Roman Road now a bridleway.

At the west end of the village stands Swalcliffe Barn, an impressive 15th Century traditional Tithe Barn. Built in 1401-1407 this is considered one of the best examples of a medieval tithe barn in England and features an almost completely intact medieval timber half-cruck roof. The barn is open free of charge on Sundays from Easter to October and houses part of the Oxfordshire Museum's collection of traditional agricultural and trade vehicles and an exhibition of 2,500 years of Swalcliffe history.