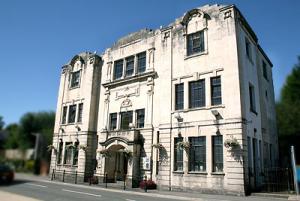 BMI History Timeline
1925
The final stones on the front of the building were laid on 4th December 1925. Originally opened as a single storey snooker hall it was owned by the Coal Industry and the Social Welfare Organisation and paid for out of the Oakdale Miners' wages at 3d a week.

1989
The building fell in to disrepair in the 1970s/1980s with the pit closures and in this year the trustees sold it to Islwyn Borough Council who promised to make it available for community use.

1992
The building reopens in February 1992 as a community arts and entertainment venue thanks to funding from Islwyn Borough Council and the Welsh Office. The opening series of concerts saw local school children perform on the same stage as Ken Dodd, Jasper Carrott and the Welsh National Opera.

Present
The building is currently one of the Arts Council of Wales core regional performing arts venues presenting over 40 shows a season ranging from well-known household names to productions staged by groups based in the local community. The annual pantomime alone attracts a total audience of over eleven thousand people.