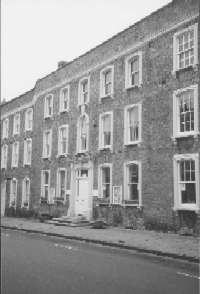 Castle Street in Bridgwater, where the Arts Centre stands, was built upon the derelict site of Bridgwater Castle which was dismantled on the orders of parliament. The eighteenth century was a time when the town of Bridgwater created great wealth and Castle Street was built as a speculative development. The houses are built of local brick with ashlar dressings and were designed by the architect Benjamin Holloway.

Construction began in 1723 on the orders of James Brydges, first Duke of Chandos. Castle Street was one of the finest streets in Somerset and predates any of the 18th century domestic buildings in Bath. Many of the original features of the house have gone. The Kelting Room contains the most interesting architectural features. The plaster ceiling mouldings and the fireplace are original, as are the wooden side cupboards, the window panels and window seats. The fireplace is in the style of Robert Adam with a fine inverted arch fire basket made of cast iron.

After the end of the 2nd W.W. number eleven Castle Street became available for sale or rent. In 1945 Gwen Pollard who was a local patron of the Arts, realized that here was an opportunity to open an Art Centre for the people of Bridgwater. Bridgwater Arts Centre was opened on 10th October 1946, with the financial help of the newly established Arts Council. It was the first Arts Centre in Britain to open with Arts Council support. A portrait of Gwen Pollard still hangs in the Kelting Room in recognition of her influence and commitment in getting the original Arts Centre open.

The building was purchased by Bridgwater Borough Council in 1966, which then passed into the ownership of Sedgemoor District Council in 1974. Number eleven Castle Street was acquired in 1982, on condition that members of the Arts Centre took responsibility for it and any costs involved in refurbishing the interior.