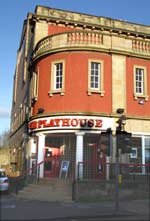 The Playhouse was originally built in 1925 and operated as a 700 seat Cinema and occasional Music Hall until changing public tastes led to a sad decline and eventual closure in 1979.  The building was only saved from demolition by the professional touring group Northumberland Theatre Company.  They bought the building and converted the ground floor into a rehearsal and administrative base for their productions.  The Company are now known as NTC Touring Theatre Company and take their highly acclaimed productions all over the country.

The upper floor is leased to an independent registered charity called The Alnwick District Playhouse Trust.  They raised over £500,000 to convert the derelict balcony of the former Cinema into a new multi-purpose Arts venue which has already been visited by over 300,000 people since re-opening in December 1990.

The Trust acquired an adjoining property in 1994 and a second phase of development work was completed in August 1996.  The Playhouse now boasts an impressive new frontage, ground floor box office and can offer full access throughout the building.