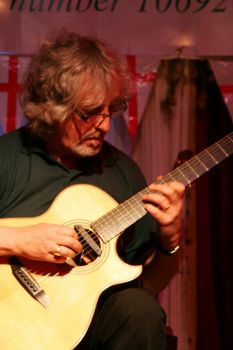 
I went to see the absolutely excellent Gordon Giltrap play at the Brook Theatre in Chatham. The Brook is actually the old Town Hall - long since no longer a civic building since first Chatham merged with Rochester and then it all merged with Gillingham to become the Medway unitary authority some years back. Anyway the building which is an old Victorian building of some stature is still in use as a Theatre. It is a great little venue. I met up with Dave an old work colleague - now enjoying his retirement and my son came along as well. Mrs F was first of all going to come along but the Year 6 leavers disco straight after a day trip to the beach made her pass.

Anyway - what of Gordon. Well this is the third time at least I've seen him at the Brook and I've seen him before including a great gig and workshop I took part in at Margate some years back when Kent Council used to organise the Kent Guitar Festival. As ever his playing is simply stunning. Mesmarising even at times not just for the technical ability he puts in put often you find yourself totally drifting off enveloped within the tune. Gordon fills in between the numbers with some wisecracks about his time in the business but also talking about the inspiration behind the pieces - like a new blues number of his new Shining Morn CD "Five Dollar Guitar" that was inspired when watching Eric Clapton talking about and playing some Robert Johnson. Gordon played a few new numbers off the new CD and the usual raft of favourites - Dublin Day, On Camber Sands, Lucifer's Cage, Heartsong etc. His amazing looping song Dodo's Dream got a suitable brilliant outing as ever - how one man can do that on stage is beyond me - I know the looper idea is simple but he layers so much on that he risks one minor mistake to ruin the whole piece. Brilliant and brave!

As we left my son described the evening as "totally inspiring" - he has had his acoustic out playing with echo effects a la Gordon but he also said the discussion of inspiration had made him want to get out and take some pictures etc. You can't probably get a better recommendation than that can you?

For the equipment junkies out there - he mostly used his trusty Rob Armstrong figure of 8 guitar the one the new Vintage sig model is based on. He played one of the prototypes of that for one number as well - impressive sound! The Armstrong baby guitar came out for things like Lords Seat and Here Comes the Sun. A cedar top Fylde was used with partial capo on a couple of newer songs. His amazing fan fretted 12 string was used on two songs - that is an amazing guitar - the sound is just breath taking. For Dodos Dream the Variax was gone and a Vintage semi-acoustic with three P90s used - I think it must have had a piezo pickup on it for the acoustic sounds - I believe I read somewhere he was having one fitted to it. Effectswise mostly it was a Boss ME50 I think.

Overall brilliant and given the tickets were a tenner I can't believe more people didn't turn up. Check out his guitars and his gig list - if you can go and see him - trust me it is a throughly brilliant evening out.