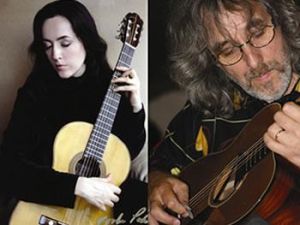 The concert held at the Purcell Room at the Southbank Centre, London was a joint appearance of Gordon Giltrap and Virginia Luque: who were most accurately billed as classical and contemporary guitar virtuosos.

I am unsure of how Virginia Luque pronounces her name (I have heard at least four alternatives). A native of Cadiz, Ms Luque flew in from the US of A especially for this concert. It was her first gig in this country and I am more than pleased to say – in the words of Max Boyce – I was there.

Her first half set consisted of a mixture of self-penned and classical pieces arranged and delivered with a Spanish/South American flavour. We even had some Chopin as well! The playing was flawless, the music full bodied and melodious and her guitar was under fine control at all times. Virginia captivated the audience not only with her music but also with her introductions – delivered in that appealing manner of one not speaking in her native tongue.

I am sure that Virginia had some existing fans in the audience, but at the end of her set she had earned a standing ovation and gained further enthusiasts. Unfortunately (for Gordon) she is also better looking than the Troubadour. (Sorry Gordon!) I sincerely hope that she can be persuaded to return.

During the interval I was thinking that Gordon must be having a "follow that" moment – but the Troubadour never disappoints. He too had friends in the audience and we were entertained to a demonstration of the masterful musicianship and repartee that has earned him so much respect, admiration and affection. Even a technical failure of his equipment – if you will excuse the expression – failed to faze him.

I was unable to tarry at the end of the concert as the last train beckoned. However I would like to thank Miss Luque for coming all this way to play for us and to thank Gordon for helping to make this wonderful concert happen. A great start to the 2010 GG concert season.

If Virginia Luque is able to return to play for us then I implore you to go to see and hear her – she will not disappoint.