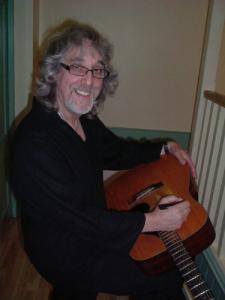 
Well, I'm just back from Cassington with Gordon's music ringing in my ears.....well not 'ringing' as the volume was perfect.

I hadn't been in the new hall, but the acoustics from a listener's point of view were excellent.

It was an intimate affair with 100 people attending, and it really felt like a happy, social occasion. Gordon is a brilliant guitarist, but also a superb showman who makes everyone feel welcome and at ease.

The quality of the playing was exceptional throughout and suffice it to say that all the old favourites were there.

During the interval, Gordon kindly signed my 38 year old Yamaha FG140 six string (bought to replace the stolen Eko that Gordon originally signed many years ago). He also signed my Guitar Sampler LP cover. I'm very lucky in many ways, as my wife let slip to Gordon that I nearly died earlier this year in intensive care, and it was the first time I had been out in nearly a year. 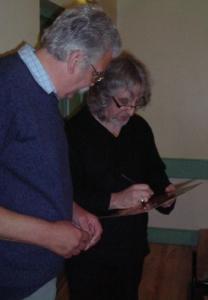 The evening went too quickly, but it has made me determined to see more live music and also get over my fears and start playing publicly again.  I was fortunate to be involved in the folk rock scene of the late 60s early 70s and played support to a lot of great musicians whilst in a support band.

Gordon is undoubtedly the best acoustic guitarist I have ever heard, and must surely be the best in the world?

PS. Hope to catch Gordon and Ray in the Holywell Music Rooms in Oxford later this year. Also I'd like to save up for him to play at my 60th in five years time.


Thank you so much for a great night of fantastic guitar work. Cassington has never seen such skill on the fretboard. I had mixed up my diary and only planned to watch the first half and then dash off but how could I leave! It was superb, thank you again!!