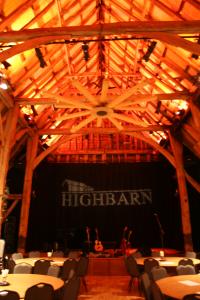 What a fantastic evening all round!

The High Barn is tucked away in rural Essex at Great Bardfield, not far from Finchingfield the most photgraphed village in England (allegedly). The venue is based in a restored barn which could be best described as a Cathedral in Wood. It is Grade II listed and dates from medieval times.

The high ceiling timbers were illuminated in golden light and the auditorium atmosphere was more akin to a sophisticated restuarant / bar. A capacity audience saw a trully great musician performing in what must be the one of the best informal music venues in the UK.

Gordon's performance as ever was flawless and he has introduced a "12 string" back into his Backing Group of guitars. He played a number of titles including Rainbow Kites on the 12 string, which took on a new lease of life and sounded much richer than on the conventional guitar.

The new Polycarbonate guitar featured more prominently and as Gordon mused is made from the same material as vandal proof bus shelters. Well if Ford can have a concerto played on Focus car parts why not?

The audience were totally absorbed and none more so than Peter Howarth, who apart from being the current lead singer with the Hollies is an accomplished singer / composer and guitarist in his own right. He had for many years wanted to see Gordon live. So no pressure for Gordon that night.......... I know Peter was particularly impressed with the Baritone Guitar and the rendition of Isabella's Wedding.

I am sure everyone present enjoyed a very memorable evening. 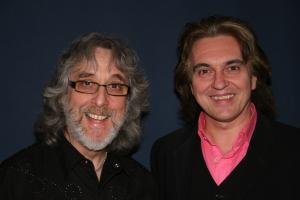 Peter Howarth's musical career comprises many facets, having left music college he worked as guitarist on the musical Joseph ...... in the West End. Since then has worked with Cliff Richard for some 20 years, touring extensively in the UK and throughout the World, providing backing vocals and guitar. He also is a sought after backing singer and it would probably be easier to list those he has not worked over the years.

He has written several musicals, including Robin Prince of Sherwood (in conjunction with Rick Fenn of 10cc. fame), he both toured the UK and appeared in the West End production as the Sheriff of Nottingham. He has toured the UK in "Only the Lonely" depicting the life and music of Roy Orbison and also "Four Steps to Heaven" as Roy again.

More recently The Hollies needed a new singer to take on the mantle made famous by Alan Clarke. Furthermore to be responsible for singing such classics as "The Air that I Breathe" and their anthem "He Ain't Heavy" as well as bringing new sounds and inspiration to the Group. The Hollies have many loyal fans and they have welcomed Peter warmly. The biggest night so far for him was probably when they appeared at the Royal Albert Hall in London.

Gordon had expressed interest in seeing the Hollies live and joined them at Birmingham Symphony Hall last autumn, when they were on tour.

After winding through the Essex countryside in the dark for nearly an hour, passing many litle villages, filled with plenty of 'Are you sure we're going the right way?'s, 'where are we now?'s, 'why do we have to go around the fields?' and 'Dad, you missed the turning's we arrived at the High Barn in Great Bardfield. Automatically I thought to text the boyfriend, however a quick check of my mobile revealed we were truly in the middle of nowhere; no signal. I strongly regretted not bringing my ipod about halfway through the journey. There's only so much Radio 2 a teenager can stand to listen to.

The High Barn is a stunning venue. Upon entering I began to question whether it was a good idea to have lit candles in a large wooden building. Its an enormous place, quite pretty really. After getting some drinks and finding our table (the man on our table turned out to be a fellow guitar player, parents pleasantly baffled at guitar talk) I thought I spotted Sue, so I first popped to the toilet then introduced myself. Fortunately, it was Sue. Chatted for a little bit (shook hands with Hilary and Peter Howarth which was just one of those right time, right place things) then made way back to my table before Gordon came on stage.

Admitedly last night was the first time I've been to an acoustic concert. It was a pleasant surprise to find my ears weren't ringing afterwards. Gordon played beautifully and gave a quick introduction to each guitar as he picked them up. I wish more musicians would do this, for once I didn't leave wondering how I could find out what gear was being used. I loved the sound of the Polymer guitar. It's very different to a traditional wooden guitar, but I quite like different. The Fylde looked and sounded stunning. The fanned frets almost made the guitar look rather wonky, which is how I described it to mum when she wanted to know if Gordon had a 12 string guitar (yes she did attempt to count the number of strings too). The first half of the show ended on a high.

During the interval I swanned over clutching one of the 3 vinyl records I'd brought with us. I took Fear Of The Dark and had it signed by Gordon. It was great to meet him and my dad also had a picture from the Visionary album signed. During the second half of the concert, towards the end Gordon dedicated Lucifer's Cage to me (mum was thrilled to bits, couldn't quite believe it was me) which was a shock. Not only did I have a song dedicated to me, but it just so happened to be my favourite one. He played Lucifer's Cage and Heartsong with a great sense of energy and by the end of the night I had pulled the muscles in the right side of my neck where I'd tilted my head in wonder for the entire duration that Gordon was onstage. Afterwards, I met with Gordon again, this time taking Perilous Journey to be signed, which was for myself and had a few pictures taken.

It was a great night and well worth venturing out in the middle of nowhere. A big thank you to Gordon, it was great to meet you and to hear your music live. My dad has waited for 30 years to see you and was not disappointed, its about time he went to one of your concerts.

I'm determined to see Gordon Giltrap play again, it was a fantastic experience. My friends better regret they didn't come!
All the best,
Toni

The photogallery from this gig can be found Here