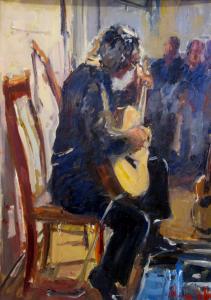 
The David Hall is one of those unique venues, like Huntingdon Hall in Worcester, that I always enjoy going to.

It is situated in an old church and benefits from the wonderful acoustics that such buildings bring, enhancing the audience listening experience.

Tonight was no exception and a packed house saw a lovely demonstration of Guitar technique and playing, interspersed with anecdotes of historical career information, humour and technical stuff.

The show started with a note of thanks to Gordon, from the compere, for a free gig he did to support the Hall a few years back during a time when closure was a real threat. What a disaster that would have been. The David Hall like many venues across the country have had their local authority funding to absolutely nothing and this always gives those local organisers a real headache as they try to close the funding gap that lack of support brings.

It was reported that that free show may have been the make or break and effectively kept this venue in place for 2/3 months at a really crucial time and now such is the progress, that the immediate future is looking bright and with the audience support I have seen this year already lets hope this situation continues into the future.

As I mentioned the support was there tonight and the audience were treated to two sets from Gordon's huge back catalogue, Pieces such as Dodo's Dream, Appalachian Dreaming and Heartsong always bring much admiration and the cover versions of George Harrison's  "Here comes the Sun", "Summer Holiday " and a Brian May type "God save the Queen" had me wondering just how many would  rise from their seats and sing along to that last one ! 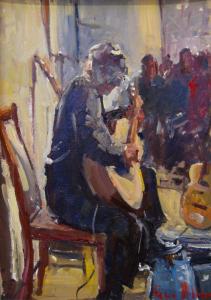 Perhaps the fact it came in the middle of the set and not at the end threw that tradition out of the window, but with the huge collective enthusiasm shown tonight by the audience –I am sure if one had stood up, the rest would have followed.

Gordon also mentioned A collaboration with keyboard maestro Rick Wakeman which has spawned "From Brush and Stone" a release, that is due later this year

Oh and before I finish, just to say Gordon also gave a note of this thanks to the organisers saying if it wasn't for all of their enthusiasm and hard work at venues like this across the country, there would be nowhere to play .
Nigel Bennett

Note about the artist Roger Dellar

Roger Dellar works from his studio in Surrey.  He has a keen interest in people and their behaviour, and is fascinated by the way the play of light transforms a subject; either working in the studio or plein air.

One of the two paintings was sold on the night to a lady in the Conford audience.