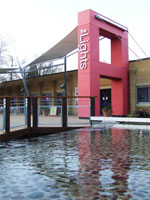 This review was sent in by Nigel Bennett, who was first introduced to Gordon's music only about a year ago.

A first visit to the revamped Lights theatre in Andover turned out to be a very pleasant experience. Tucked away behind the leisure centre, a very nice new theatre holding about 242 - about 2/3rds sold so audience was about 160 ish according to the manager of the venue, and re-furbished within the last 7 months, it is a venue well worth a visit.

Even more so, when you have a musician of infinite skill who takes to the stage in the shape of Gordon Giltrap. A very receptive and appreciative audience had ventured out on a pretty foul night and it soon became obvious that they were there to be tempted by the delights of the night.

No pics I'm afraid -  it was a council venue and they are so odd about those sort of things I have found and I didn't take a camera as it would have been a bit difficult.

Although Gordon's show is an instrumental masterpiece, his anecdotes and stories between the tunes always maintain the intimacy that audiences always crave from the performers.

I'm sat down trying to put together a few thoughts from the night and without a set list in sight to help me.
So I'll list a few fairly random thoughts of those pieces I remember.

On Camber Sands, written about the seaside shore of long ago, conjuring up thoughts of sunny days, wind blowing in your hair but without the grit of sand in sandwiches that always caused despair. A piece of your own perhaps childhood memories as the waves gently lap upon the shore.

Appalachian Dreaming - a piece I was looking forward to hearing live again. This is a really uplifting tune with a nice and very catchy thread running through it.

Here comes the Sun - a tribute to "Sir George Harrison" and played on a dinky guitar. This is a lovely song of course that we all know. I have a similar affection for "My friend the sun" a song performed by "Family" another gentle piece that I have always thought are pretty similar and would be great played as a piece together. I wonder?

Lucifers Cage -A heavy opening and gave the feel of something that would not be out of place on the Rock circuit. Interspersed with an intoxicating and repeated hook, that somehow gave me a recollection on a few notes of a Steve Howe piece from "Yes" from way back in the early 70's. A storming and energetic finish.

Heartsong - This is without doubt Gordon's most public face, with the tune being played so many times on prime time BBC. An all action piece and recognised by young and old as a masterpiece in itself.

Dodo's Dream - This piece of wizardry finished off the first set and for those who may be had not seen it performed before would feel tonight they would see a work of genius.

Indeed, one gent rose to his feet in a standing ovation, adulation at the end such was the impact, either that, or he was looking for a quick exit to the bar as this was the last tune of the first set? Trust me, it was the former, the applause rang loud and long, cutting short the interval drinks and although I was not timing, it could have been by as much as an hour. This piece obviously had that great impact as a whole and many called for a reprise and Gordon suitably obliged with another rendition in the second half, much to the crowds delight.

Others on the night included Isabella's Wedding, Simply Margaret and Nursery Chimes.

It was pretty evident that the audience tonight really appreciated the skills on display. I must say I learned a lot more about guitar techniques called welding and putting holes where holes have never been before!

Without doubt there was plenty of evidence of Gordon's pedigree, in many shapes and forms from the array of guitars on sight to stories of involvement in differing types of shows.

Gordon seemed to be enjoying himself and seemed to sell loads of cd's - did say a very brief "hello", but he was busy signing and didn't want to impose too much the shy creature that I am.

Listening to the various comments from the audience afterwards in the foyer, it was quite obvious they were all in one voice saying how much they enjoyed this show, before venturing out, hoping the rain had subsided.